§
I have a stack of postcards that have been following me around for several weeks now. Since May, actually, when I agreed (with myself) to draw something on blank cards. Oxygen Art Centre in Nelson was doing a prompt a day event called "Big Draw" so I sort of followed that.
I am no artist. I remember Mr. Brown's Art Class in Junior High, how I'd watch enviously as one or other of my classmates would produce something gorgeous. A tree that looked like a tree. A mountain scene. A familiar street with houses that looked right (I must have been daydreaming when he discussed perspective.) Something abstract with fabulous colours. Watercolours that didn't run into each other.
Writing classes, however, were different. Oh, they weren't just writing classes. "Compostion" was lumped in with English classes which were divided, in the earlier grades at least, into English Grammar and English Literature. I enjoyed both, particularly when we got to "write" something and even more particularly when we were studying poetry. In Grade 12 I actually had my father for English 91, as it was called then. It was the only A I got that year. (He made a point of assigning all the marking in that class to another teacher so he couldn't be accused of bias.)
So, back to postcards. It's almost time for August Postcard Poeming again! I've been doing this every summer since 2007. And this year, for the first time ever, I'm sending all orginals, as in both sides by me! 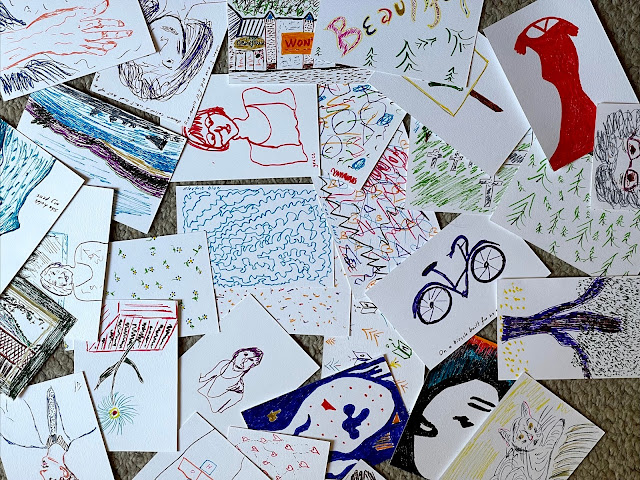 I still don't "get" perspective and I'm not sure Mr. Brown would approve of this hodgepodge of stuff, but by golly I had fun! And that's the main thing the Postcard Poem Fest is about; getting your inner-editor off your back and going for it.
The idea is to dash off a poem directly onto the card. It took me several years of the fest before I was actually able to do this so if you have to write out a first draft on a notepad who am I to tell you not to? You write a poem a day during the month of August—once you've got your list of 32 names including your own, feel free to start. Some days, to be honest, I don't get to it. Other days I might write two or three.
This year's fest is dedicated to the memories of Beat poets Michael McClure and Diane di Prima, both of whom died in 2020. In one of the first years di Prima participated in the postcard fest. Here's the card I got from her. See how she summarizes what the fest is about in just a few lines. 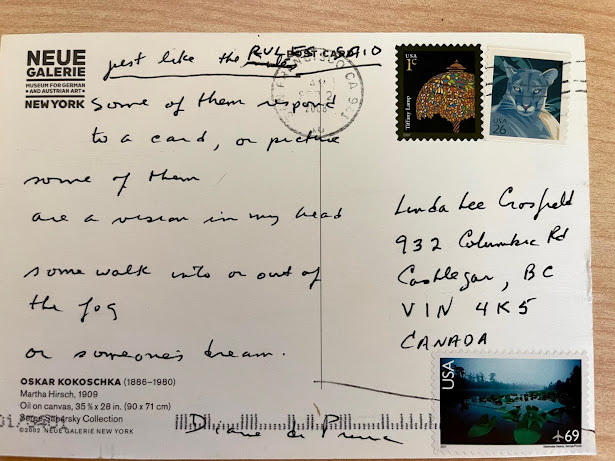 just like the RULES SAID
some of them respond
to a card, or picture
some of them
are a vision in my head
some walk into or out of
the fog
or someone's dream
Diane di Prima
If you want to play along, here are a few relevant links:
The blog for the fest is here: https://popo.cards
Sign up via Submittable here. The $15 entry fee goes to support Seattle Poetry Lab and all it does for poetry. DEADLINE: JULY 18th, 2021
A workshop handout for the poetry postcard writing exercise by Paul Nelson who started this whole adventure is here:
And finally, pay attention to postal rates. In Canada it costs
$1.07 cents to mail a card within Canada (.92 if you buy in bulk)
$1.30 to send one to the States
$2.71 International destinations
Not an inexpensive exercise, but I think of it as a nice dinner out.
If you're not in Canada (and most postcarders are not), PLEASE check with your own post office for your out-of-country rates.
Here, mostly for my own records, are some of the posts I've made where I talked about postcard poems:
2021  2019 2019 again  2017  2017 again  2016  2014  2007  2007 again
Sisu just came in, saw the cards on the floor, and decided to make a statement. I think he's saying, "Not this again!"
'Fraid so! 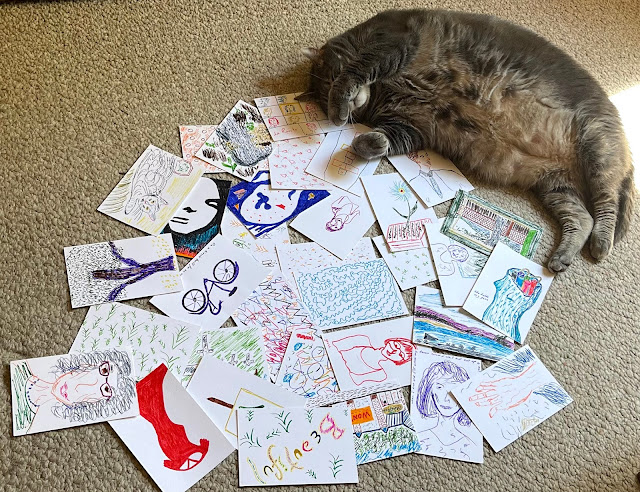