A MEANDER DOWN THE COLUMBIA WITH FRED WAH AND RITA WONG

§
This morning I found myself returning to a poem to do with the Columbia River I started writing a while back. It's form, if it has a form, is kind of a departure for me. It starts out like a "regular poem" and then morphs into a series of words beginning with the letter n in an attempt to suggest the inexorable flow of the river as it makes its way to the Pacific. Yesterday on a Zoom call I read it to a small group of fellow writers and one of them had a great suggestion, namely to return to the beginning of the poem after I go through all the n stuff.
After fiddling with it for some time this morning, doing a little fact-checking online and so forth, I wanted to see a picture of the whole river so I got out my copy of Rita Wong's and Fred Wah's 2018 book, beholden: a poem as long as the river. And I did something I'm always telling other poets they should do; I read it aloud. To myself. First Fred's poem, then Rita's.
One of its authors, Fred Wah, talked about it at a symposium about upstream benefits in 2017 and I mentioned this book here a couple of years ago. I referred to it as "gorgeous", and it is, a visual tour-de-force from Talonbooks in Vancouver. I remember seeing it displayed in its 1x114-foot-long glory at Touchstones Gallery in Nelson—a stunning piece of work by artist Nick Conbere where the entirety of the two poems is displayed in such a way that you can imagine yourself walking along the river itself. 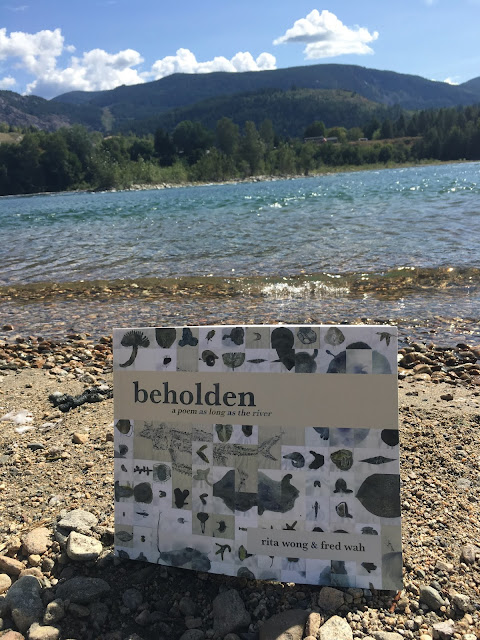 Recently I've been part of a small group of us who are reading Nathaniel Mackey's Double Trio aloud, each of us taking turns, and that has reminded me how much more powerful poetry IS when heard as opposed to simply read. (In the case of Mackey, I can't say I understand it all but the sound, people, the sound!) I have looked at beholden many times since I got it, read parts of it (as I tend to do with most poetry books, to be honest), but today I read it, out loud, start to finish, and it was such a different experience I want everybody to do it!
Of course, it doesn't hurt that both poets are masterful with words. Listen to Fred Wah here:
...the River's voice is the sound our body makes when we're sleepwalking through the abyss of our own presence in the world... (p.80–81)

or Rita Wong, when she says:
...Imperial delirium silences salmon abundance   chokes Kettle Falls' joyful convergence that cannot be forgotten, cannot be unseen, unheard, unspoken since recreation that wrecks creation leans to dazed stupor that isn't fun for anyone... (p. 57–59)

They go on like this throughout, starting where the Columbia begins as a tiny spring coming out of the ground at Columbia Lake up near Invermere in British Columbia (here's a 2 ½ minute video that gives you an idea what it looks like there) until the River arrives at the Pacific Ocean, when, to quote Rita Wong again, it ...takes over the page as the ocean accepts the river.

It's easy enough to follow who is writing which poem because Wah's is typeset while Wong's is in her own handwriting. They weave in and out of each other, crossing over bridges to get to the other side for awhile, then crossing back. If you look carefully at the way I've situated the next two pictures you will see two such crossings, first over the Robson bridge where I go when I want to walk the Waldie Island Trail and then over the Kinnaird bridge which is the one I cross from Ootischenia, where I live, to get to Castlegar. In the middle of the circle of words is the confluence of the Kootenay and Columbia Rivers, and Zuckerberg Island. As you continue south on the Columbia you pass Genelle on your way toward the border, that serious-looking line that bisects the bottom page at ...remember the Smoke Eaters whistled offside for years of pollution flowing south across the border as tainted as at the signature of Treaty  /  and all the forked tongues whispering Doctrine of Discovery... (Wah) and a riff on global warning—...the incomprehensible speed & scale of logging, unforestry, turning pines into poles and matchsticks, burning us up faster than the  /  glaciers could cool us down. (Wong)

So yes. Get this book. Read it aloud, to yourself, to anyone who'll listen. You'll be glad you did. And you'll have to excuse me now. I'm going for a walk. As it's late in the day, I'll head for Waldie Island to catch the last of the sun—it got up to 30C/86F today, the hottest so far this year. I'll be walking on the north side, see if I can catch some more of my own poem, the Columbia having been sneaking into my work on and off for a very long time. This year will be year 15 for the annual August postcard poem fest. The first card I wrote, back in 2007, began with the words Let it begin with a river...
§
Posted by Linda Crosfield at 16:19

What an original idea for a book. The ultimate "form" poem, rushing and meandering. Hope all is well with you.