POEMS AND POSTCARDS AND NaPoWriMo STARTS AGAIN IN APRIL!

§
It's almost April and I have a full month of poetry ahead. Once again I've signed up with the lovely Maureen Thorson at NaPoWriMo. She orchestrates the daily prompts and I'll attempt to do that along with reading and writing poetry around the two online workshops I've signed up for.
One of those is with Paul E. Nelson and it's the third one he's offered that examines seriality in poetry. The first two were fascinating as I'm sure the next one will be. It's called A Sequence of Energies and we'll be delving into work by Robin Blaser, among others. I believe there are still one or two spaces so should you be interested here's the link.
The other course is with Susan Andrews Grace and through Oxygen Art Centre in Nelson, B.C. This one is called Reading and Writing Rilke. Rilke is a poet I know next to nothing about save his Letters to a Young Poet so I'm looking forward to this one, too.
Yesterday I picked up the mail for the first time in several days and there were a couple of poetry chapbooks waiting for me. 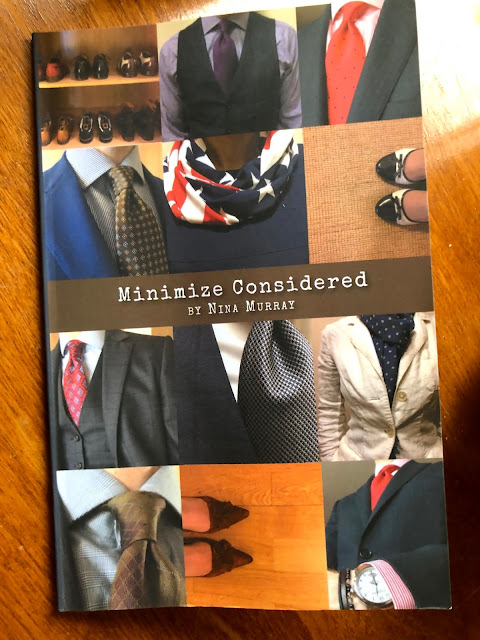 Minimize Considered from Finishing Line Press in Kentucky is by Nina Murray. I heard about her through POPO, formerly known as the August Postcard Poem Fest (that I've written about here and here and here and here) when Paul interviewed her as he's done several of us now. (His interview with me is here.) I was so taken with her description of her chapbook I ordered it and it finally arrived and is just as delightful as I thought it would be. Originally from Lviv in the Western Ukraine, Murray works in the U.S. Department of State and has been posted to several different places, including Toronto. Her poems often mention the city in which they are set and I loved finding her in Montreal, a city I lived in for four years back in the seventies that she immediately brought me back to
smoking a cigar
down by the Vieux Port
the carriage horses end their shift
and we stop to let them pass
two dusty
muscled
gray Percherons
they break into a trot
going home
strike sparks from the stones
(from December)
Nina Murray possesses a fine eye for observation and a deft hand for writing it down. Take the first part of her poem Departures:
I
Boarding a train such a different undertaking
from flying—still free from the technocratic
teleology of gates and chutes,
the platform—mythically two-faced—
tantalizing in its promise of error
of the possibility to choose the wrong side,
board the wrong train,
turn one's back on oneself and depart
in the opposite direction.
Also in the mail was a totally unexpected gift from Richard Osler who I met at the first Patrick Lane workshop I attended at Glenairley on Vancouver Island in 2007. It's a collection of forty-seven postcard poems he wrote last year when Covid-19 was locking us all down and he received an email from California poet Allegra Brucker asking if he wanted to participate in a postcard poem project. (They're everywhere! Truly!) 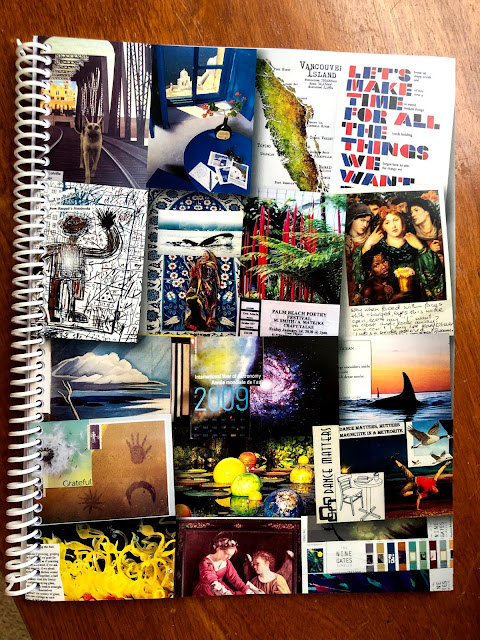 His postcards are reproduced, larger than life, and his poems work beautifully with the images. Take, for example, this one which is written on the back of a card depicting
Dürer's Rhinoceros
Not a conjured-up monster.
But covered in armour plates
and chain mail who couldn't say:
monstrous; couldn't say: this
armoured vehicle on four legs and the truth,
stranger, the subject of Dürer's masterpiece,
seen by him in a sketch
not in the flesh, this Indian rhino
brought to Lisbon in 1515
then chained and shackled on the deck
of a ship wrecked on its way to Rome,
the rhino a gift for the Pope. Chained
and shackled, unable to swim,
it drowned. The carcass saved, some say
and the rough skin stuffed with straw,
taxidermy of the dispossessed,
sent on anyway to Rome and sometime
after lost and forgotten unlike Dürer's
rhino, here, pictured on a postcard, and true,
there be monsters but not this rhino, not
this creature, drowned alone, wrecked. 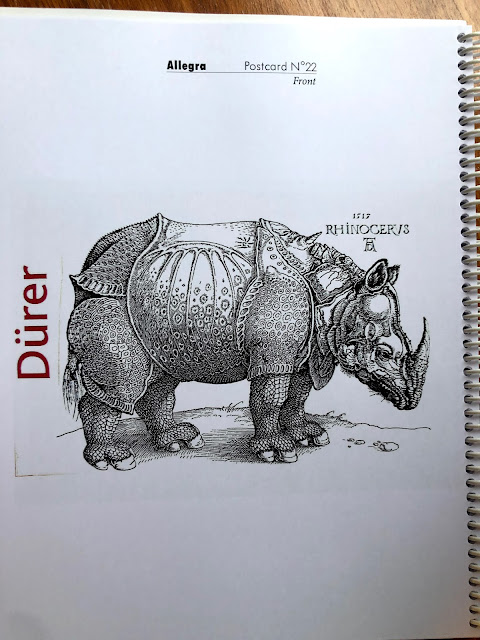 I'm drowning a little myself, but in things to read so it's a good drowning. See you in April if not before!
§
Posted by Linda Crosfield at 19:05

I am so pleased I found your blog ... an enjoyable read tonight with the wind and the rain as a back drop !
.
How lucky you are to be taking the workshop "Reading and Writing Rilke" I'd forgotten all about the NaPoWriMo for April. A busy busy month for me too ... including a sketchbook workshop, and watercolor class to get me back painting again.

Lovely to see this Linda. Thank you. I have know the Durer image for years but only when writing the postcard poem did I discover the horrible history behind it! Thank you for your blog!