§
At the beginning of February when I was starting to do a daily haiku I said I was going to post a piece I'd written about how I got started writing these little poems. I've edited it ever so slightly but this is pretty much how it appeared in Turning Point, an American woodturning magazine, in 2001. A shorter version was published in NZ Woodturner the same year. It's long. Go grab a coffee or something.
``````````````````````````````````````````

It’s March, and in shops and studios around Whangarei lathes have been unbolted from cement floors and band saws, drill presses, belt sanders, kilns and forges are being prepared for transit. Boxes of donated supplies are lined up, ready to go. I’m amazed at the sheer physical labour involved in this undertaking in which shop equipment belonging to dozens of artists will be transported to Camp Manaia, set up for a week, disassembled and returned. 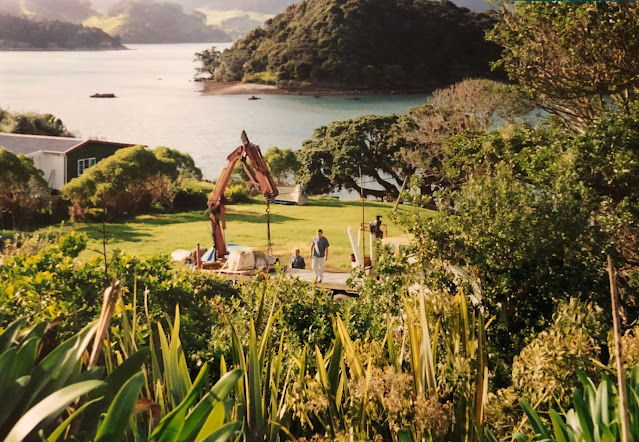 Two years of hard work by the volunteer organizing committee is about to be realized at CollaboratioNZ 2001, New Zealand’s second biennial event where artists from different media get together for five days and make things. This time it’s international, drawing nine artists from Australia, Canada and the United States as well as forty-seven from New Zealand.

My husband, Ted, first visited New Zealand in 1995 and came back to Canada determined to someday return to the country where it seems there are as many woodturners as trees. The opportunity to attend CollaboratioNZ 2001 provides the impetus for us to trade our winter (the real kind—cold, with snow) for a New Zealand summer. I love the idea of going south, but I’m not so sure about CollaboratioNZ. I’m a writer, not a visual artist, and I wonder what, if anything, I can contribute to the collaborative process. It never occurs to me I may actually get something out of it.

The current spate of collaborative events began in 1992 in Saskatchewan, spearheaded by woodturner Michael Hosaluk. In 1996 New Zealand woodturner Graeme Priddle came to Canada, attended Conservation & Collaboration at Emma Lake, had the time of his life and decided the time was right for a similar undertaking in his country. An enthusiastic group of organizers based in and around Whangerei found corporate sponsors to donate goods and services. Working artists volunteered to be the resource people who attend the conference and give their time and talent to help put together a phenomenal event where participants have nothing to do but create art. “Remember, it’s not about product,” warns Graeme as he welcomes the group the first night, “it’s about the process.”

Artists working together isn’t new, but this loosely organized approach to collaboration is quite refreshing. An appropriate site must be found, preferably one that’s a little out of the way as it’s not uncommon for participants to become temporarily obsessed with what they’re doing and insist on working all night. 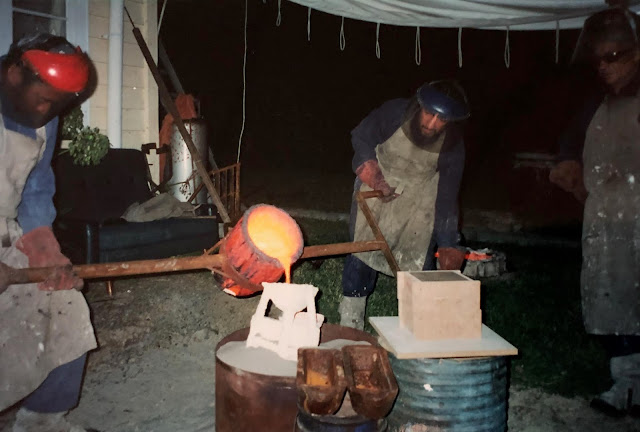 CollaboratioNZ is at the Manaia Baptist Camp, named for the imposing Mount Manaia which towers above it. Situated on picturesque McGregors Bay, a half-hour drive from Whangarei, the camp is reminiscent of any you ever attended as a kid, only this one has less rules and much better toys. The organizers have arranged for the preparation of three meals a day. (Probably nothing encourages the actual production of art more than having someone ring a gong when meals are ready).

Rented marquees provide the first challenge to the set-up committee. No one here has actually put one up before and the instructions that came with them are sketchy and incomplete. Discussion ensues as to which pole goes where but after a few false starts the first marquee is standing. This bodes well for the collaborative work to follow.

For those who aren’t sure what they want to do a visit to the scrounge table is a good way to get started. Participants are encouraged to bring items they no longer have use for to share with others. A truly eclectic selection turns up at Camp Manaia: samples of paper, glass pyramids, dried plants, a bag full of pen spacers, antlers, several partially turned bowls, glass beads, ceramic elephants, tiny clocks, seashells, fish nets, copper wire, and more. The mound of stuff on the table is irrefutable proof that one person’s junk is another’s treasure. As the days pass the table’s content evolves. Some browsers find exactly what they’re looking for while others favour a spontaneous approach and pick out whatever catches their imagination. One day, Peter Oliver picks up a bowl Graeme has given up on, turns it over a couple of times and takes it away. When I see it again, Peter’s skillful carving has transformed the bottom of it into the face and bust of a woman, breasts and chin where the legs of the bowl would have been. 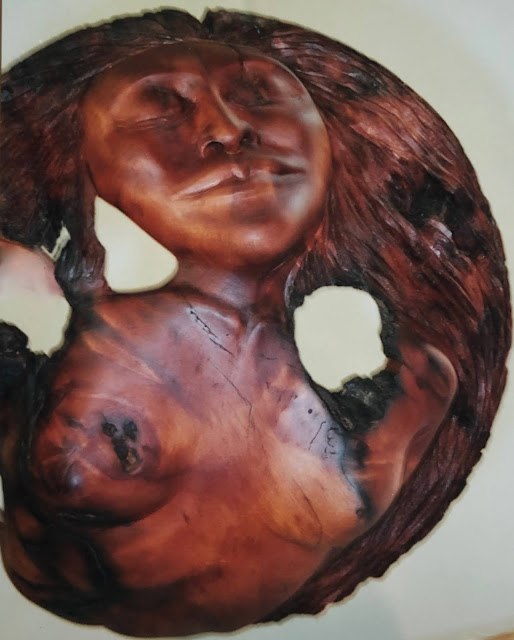 Different approaches to collaboration become evident as the week progresses. Potters Maureen and Mac Lewis are working in the big tent, assisting both novices and the more experienced to work with clay. In the foundry area, Lyonel Grant pours a bronze casting of a giraffe he carved in cuttle bone. Later, hot glass artist Shona Firman makes the head and the base. 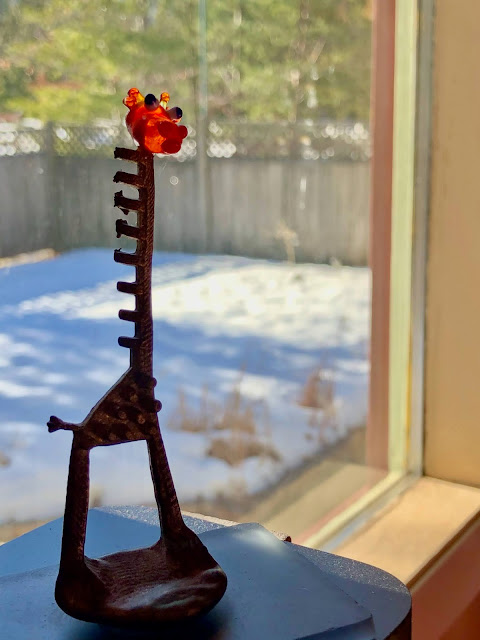 The woodworking tent is alive with activity. Ross and Heather Vivien are making a table. Californian furniture maker, Michael Cullen, is texturing a container that almost instantly is known as the Manaia Box, for such is the influence of the ever-looming mountain. When he’s done, Tanya Norman will line the box with some of the exquisite paper she brought with her from Canada. She and Michael have worked together before at the Emma Lake Collaboration in 2000. Shona fashions a glass lid for the box, and bone carver Len Kay shapes a handle from a deer’s antler.

I don’t do much at first. I make a glass bead, paint on a duvet cover, attempt to turn flax into fiber and make paper from wild ginger. 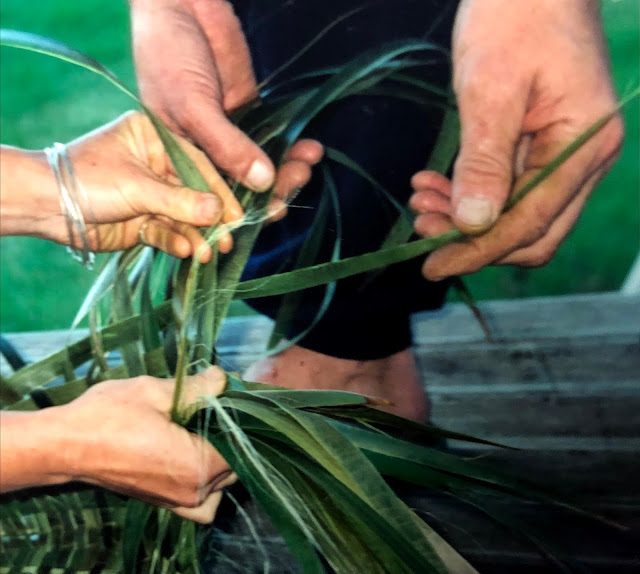 Del Stubbs demonstrates suminagashi, an ancient Japanese process that uses pointed brushes to put ink onto the surface of water until a pattern is achieved that may be manipulated with a toothpick or a breath. When paper is placed on the water it picks up the design. A piece of silk works, too. 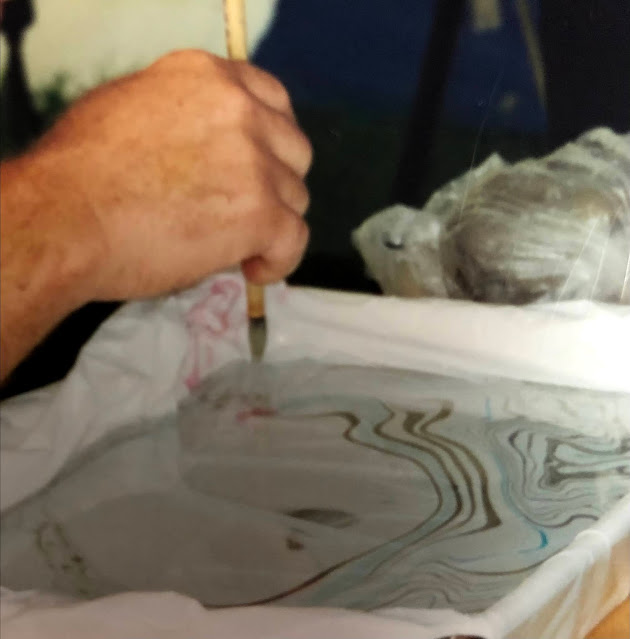 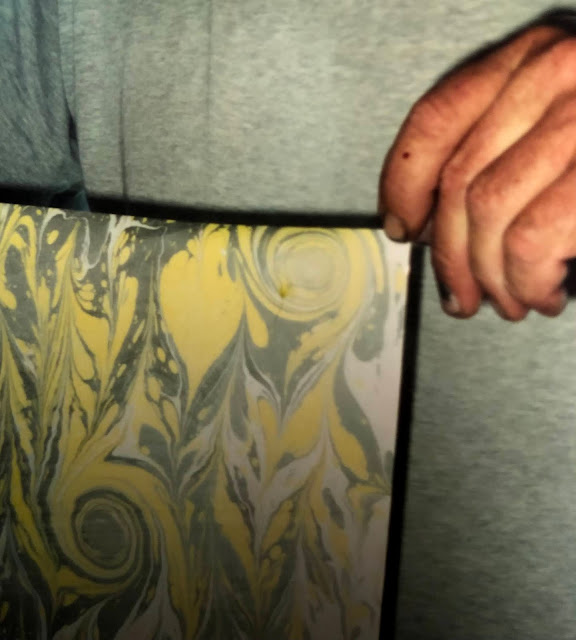 By the middle of the week I’m feeling overwhelmed. This event is supposed be for artists; what am I doing here? I get my notebook and take myself off to a quiet place and end up writing several haiku and then, on a whim, take the piece of silk with the suminagashi ink on it and pull it tight over one of the poems. I can read the words through the silk. Suddenly, the light of the collaborative process that has been flickering at me like the start of a brush fire roars to life, and I have an idea! 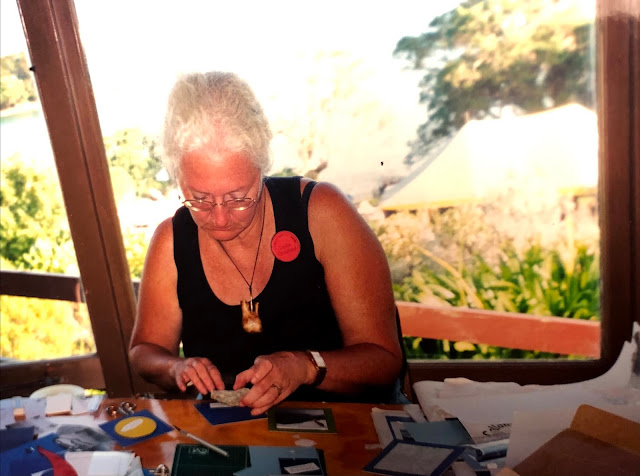 I’m glad to see several pieces of matte board are still on the scrounge table. While I’m at it, I pick up a piece of green stone, a slice of antler, and a print of a digital photo of McGregors Bay. I find some table space in the room where Tanya has her paper and where Gavan Riley, the jeweler, is working. I cut the matte into squares and begin to assemble the haiku. They’re all about different things: volcanoes and fishing and moonlight and stone carving and drowning and ink on water. Gavan makes me a hook out of thin silver wire. Shona finds the perfect piece of orange/red glass for the volcano. Tanya gives me a piece of her paper for the moon and a strand of persimmon-dyed thread to make a line for the hook. Len Kay shows me how to use the belt sander so I can flatten one side of a piece of stone, a chip from the carving Kap Pothan is working on. 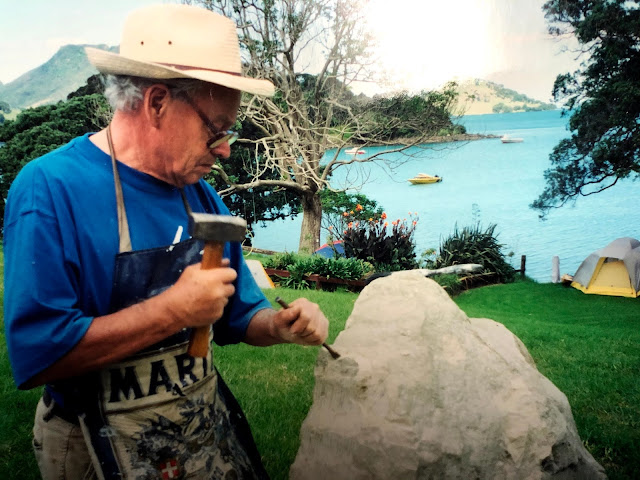 Margaret Pritchard lets me use her computer to print the little poems. When I’m finished with each one, I join the squares with strips of leather to make a wall-hanging. I call it Collabyrinth.

All the items made during the week are transported to Whangarei for the auction. Over one hundred and thirty pieces are on display and the variety is stunning. Screens, lamps, tables, bowls, vases, jewelry, ornaments, sculptures, and a handmade book all vie for attention—and attention is paid, judging from the enthusiastic crowd that comes to view the art, stays until the end and spends almost double the amount collected two years before. I bought paper, a wonderful collection of marbled and textured handmade sheets. 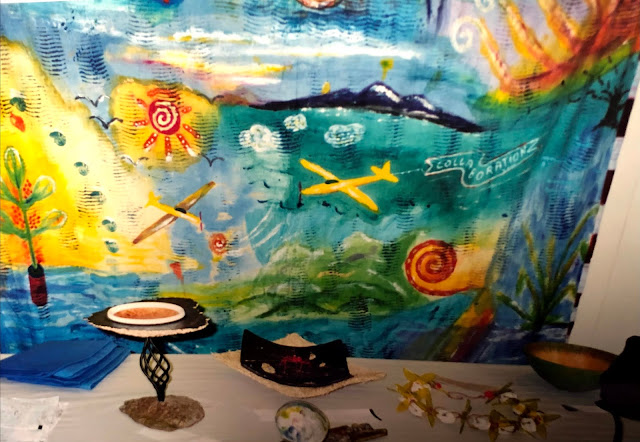 When it comes to collaborative work, less can be more. But to see a turned and decorated jarrah burl poised on top of six perfectly wound ribbons of iron set in a bronze base is to realize that more can be more, too. Seven artists are credited with working on Hidden Bay as this piece is called, and at the outset probably not one of them could have told you what the end result would be. And what is the end result, anyway? A twist of black iron mounted between a jarrah burl and a sold half-moon of bronze? A dramatic piece of bronze resting beneath an assembly of iron and wood? There is no one answer for art is always subjective and depends on the point of view of the beholder. 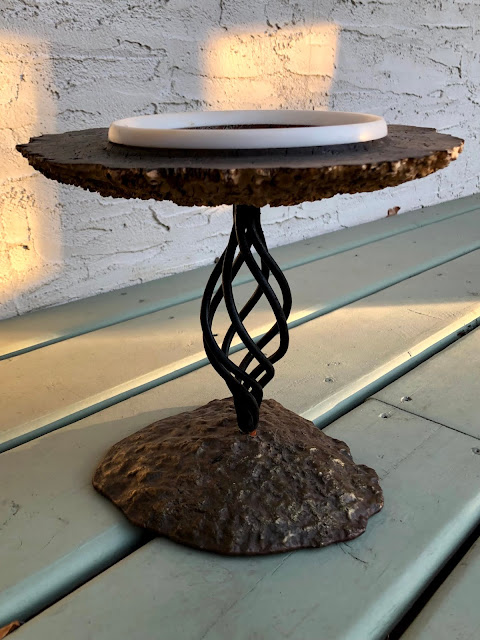 Thanks to the crazy pace we humans seem determined to set for ourselves it’s easy to forget how to play, and sometimes all but impossible to set aside time for it. An event like CollaboratioNZ is invaluable, for not only does is remind us how to play, it encourages it.

Posted by Linda Crosfield at 23:19