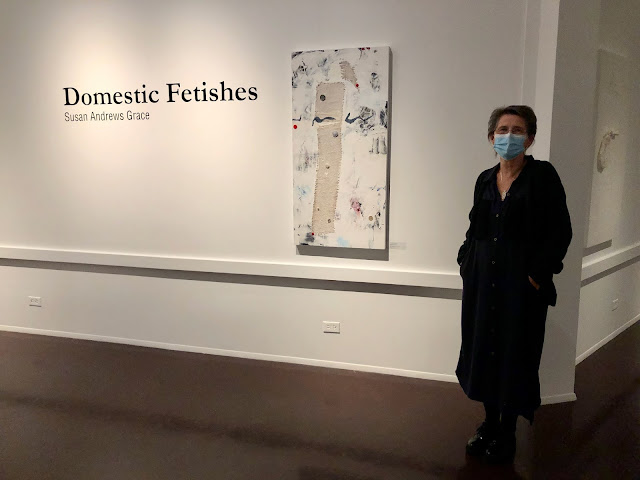 Susan Andrews Grace has an eye for the mundane, the ridiculous, and the sublime, all of which are on display in her exhibition at the Kootenay Gallery of Art in Castlegar. Although the show has been up for a couple of weeks now, the official "opening" was on Friday, September 25th.
Domestic Fetishes comprises over two hundred objects that are in some way relevant to domesticity as it relates to women. The title is perfect, a fetish being an inanimate object with some kind of cryptic power. As Susan puts it in her artist statement, they are "objects relative to the world of an artist and woman who has done a heck of a a lot of domestic work."
Upon entering the gallery space, you notice how very white everything is. White, at first suggesting bland, suggesting washed-out, suggesting virginal, and possibly even suggesting the confusion that arises when one finds oneself in the middle of a white-out on a dark road on a nasty winter's day.
The whiteness is a result of the artist working with cast plaster, limestone, clay, and various forms of silk, covering and enhancing scores of household objects you'd be likely to find on shelves and in drawers and cupboards in any home.
As I wandered about taking in the incredible number of objects that are part of Domestic Fetishes I found myself thinking about something I hadn't thought of in years: my hope chest.
Did you have a hope chest? They were a fairly normal thing to have when I was growing up. Basically, it was some sort of container—a box, finely crafted or crude—for accumulating things a young woman would surely need should she find herself married. Things like linens and cookware. Things like cutlery and dishes. My hope chest took the form of an old steamer trunk. My older female relations delighted in providing things for it; my grandmother got into the act before I even had such a box, putting aside embroidered pillowcases and tea towels. I still have her pillowcases that say, Mr. and Mrs. and her tea towels that announce Breakfast, Lunch, Dinner, and Teatime. There was a teapot that played Tea For Two when you upended it to pour, and a set of "luncheon dishes", most of which got broken on one of my cross-country trips. So many expectations were packed into that trunk it's a wonder I could close it.
I still use the tea towels from time to time, but I could never quite bring myself to haul out those pillowcases. After seeing Susan Andrews Grace's take on the domesticity scene I begin to understand why.
The show is up until the 31st of October. Catch it if you can. 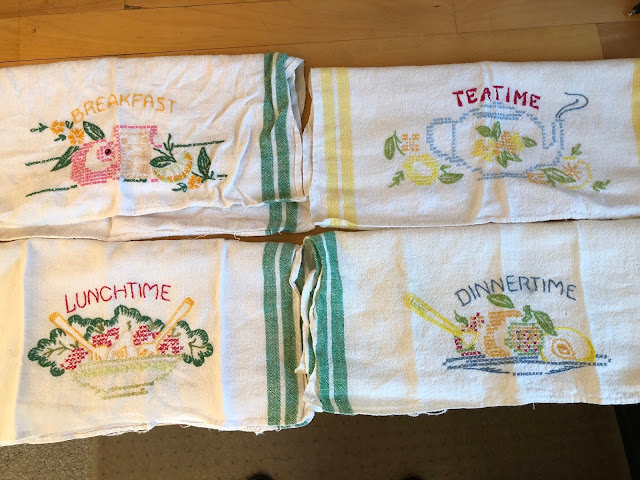 Posted by Linda Crosfield at 22:40

Thanks for your blog on this show Linda - the show is very thought-provoking and some good humour interwoven with the sobering imagery of weddings and violence.

And yes, 'hope chests' figured large in my childhood mythology,although I never actually had one. But whenever the topic came up, my brother also corrected the title to 'despair barrel'.

The bundle of receipts was the first thing I saw and I hooted aloud. How true to our daily lives (just having shopped at Ferraro's!) So then I went from laughter to peering closely at things (the rats in the men's collars signifying the rat race): and then the breathtaking images of domestic bliss and domestic violence. All that white is so stark, like the snowed-in prairie, terrible and beautiful all at once. I am in awe of Susan's talent, and thank you, Linda, for your insights. So interesting that this show, and the retrospective of work by Ann Swanson Gross, lush in colour and form, with her amazing imagery of women, sometimes so sweet, sometimes so sad, and always powerful, are side by side.