I had forgotten I have tinnitus while I was in Mexico. I was so surprised when I went to bed the first night we were back and there was that familiar ringing again. In Mexico there's always something making noise. Dogs barking, music coming from any number of sources, people calling to each other, the gas truck announcing "Global Gaaaaaaaaaas", the ice cream cart jingling away, loudspeakers pronouncing something all but intelligible in Spanish or English, many of these all at once. Cacophony personified is Mexico. And I'm missing it while at the same time I'm loving the silence.


Day #1 of quarantine I didn't even get dressed. I had a bath late in the afternoon. Unpacked. Did a little laundry. While unpacking I watched a bunch of Schitts Creek because one needs humour these days and that bunch sure provides it for me.

It's not isolation, actually, that we're in. Isolation is what'll happen should I actually get this 'flu. Quarantine is what we all should be doing to keep it from spreading. But "Ootischenia Isolation" has a certain ring to it, don't you think?

I suspect there's going to be a crack-down soon. People are still not quite getting the finer points of this quarantine business. There seems to be an assumption that when people come home from out-of-country they step off the plane and there they are, home. Not so.

Today is Day #4 of our 14 day quarantine. I can hardly believe that a week ago Monday I made dinner for Arno and Jane, Dianne and Andy, and Anne. In La Manzanilla, Mexico. 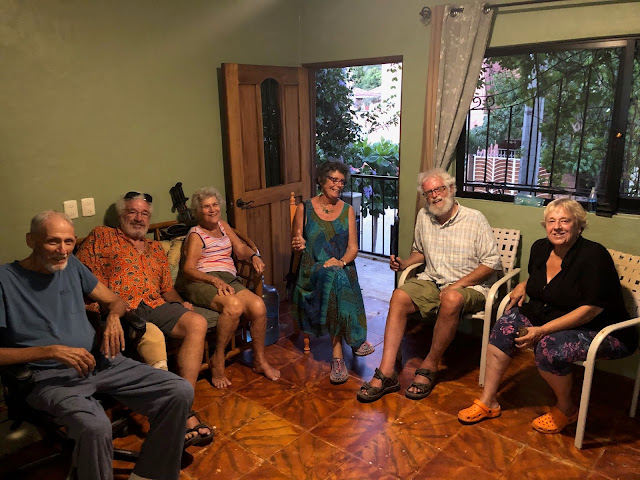 That night Anne was staying until the end of April and Dianne and Andy were leaving April 6 and Jane and Arno were starting to talk about maybe not us much time in Puerto Vallarta before they went home. Now Dianne and Andy are home in PEI, also in quarantine, Anne got home Saturday night and posted a picture of her toes in the bathtub, quarantine for her, too. Jane and Arno have to go home to New York, a bit of a hot spot. I'm waiting to hear what they're doing.

So, a lot of changes in just five days, and now we're home in Ootischenia, weather is passable, still large patches of snow in the yard but equally large patches of ground. Everything here still has that grey, ugh, après winter look. But I look out the window I can see tiny buds showing on the oak, the sky which looked a bit ominous earlier now has lots of blue opening up behind swiftly moving clouds and hey, it's officially spring now and a few crocuses are showing up here and there!

This is all so strange. Let me tell you about the trip home.

Home. Cats. Two-hour old sourdough bread from my sisters. Soup. Comfort.
I can't put into words how incredibly good it is to be here. We all well stocked with food. We have Cheezies. Thanks to the abundance of communication given us by technology we can easily stay in touch with family and all folk we love.

The last few days were intense. Think of it; Friday we were in La Manzanilla until just after noon. We arrived at the airport and were given a form to fill out and had our temperatures taken and recorded on said form which was then never collected by anyone but it's on my desk. On the plane, we totally lucked out and had three seats to ourselves!

I do not recommend watching The Art of Racing in the Rain if you aren't supposed to be touching your face. I was crying 30 seconds in and didn't stop for most of the movie. This meant much eye wiping and nose blowing (quietly!) so I'm sure I'm screwed. When you start to think about it there are just so many places you can potentially get or give this virus it's hard to keep track. Especially when you're in airports and on airplanes and in cabs and at motor inns.

We landed in Calgary, had about 2 ½ hours there before our flight to Kelowna. We'd requested a wheelchair for Ted. There were five chairs on our flight and four WestJet passenger agents (as we were called when I did that job; then customer service agents) so after I bounded up the ramp to get out of the way you can imagine who got asked if they could push a chair. Which was fine,  until we had to collect our bags and go through customs. I got the three suitcases onto a cart and in a couple of places was pushing the wheelchair with one hand and the luggage cart with the push-down handle that acts as a break with the other.

I'd emailed the hotel to say we'd be getting there late, but when we arrived it was locked as the man on duty had gone out to get a snack. A note on the door would have been nice. He was ready to not let us stay because we mentioned we'd come in from Mexico. He said they'd been instructed not to accept guests arriving from other countries. I looked him in the eye and said we were from Castlegar. It was a long look. We stayed. I take his point, though. And yet, the virus is also being spread among people with no record of being in contact with anyone who traveled. Improbably, as I hadn't set an alarm or had it on a radio station, I woke up to the sound of my phone playing Air from Hair which was perfect in a weird sort of way.

The air, the air
is everywhere
Breathe deep,
while you sleep,
breathe deep
lyrics by Gerome Ragni and James Rado

What to do?
We stop. We get ourselves to where it makes most sense for us to stop and we stop. We stop going out, no parties, no movies, no plays, no bars, no dinners with friends, no dropping in for coffee, no hugging...hopefully not forever or even for a long time, but right now, we stop.

I'm glad we can stop now.

Stay tuned here, though. Judy Dykstra-Brown and I are going to encourage each other to do the poem-a-day for April which is poetry month challenge. We'll be blogging, me here and Judy at https://judydykstrabrown.com.

Posted by Linda Crosfield at 14:48

I am so glad you and Ted are home safely though I appreciated the description of the arduous journey back from Mexico too! Keep writing your gorgeous and apt and funny poetry. Thank you. xoxo Caroline in splendid self-isolation on Lennard Lightstation (and continuing until some unspecified time in the future well past my so-called retirement on May 1st...)