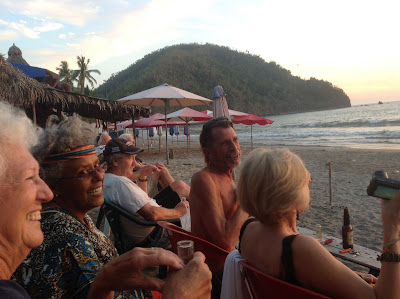 Today's prompt:  "write a poem in which you closely describe an object or place, and then end with a much more abstract line that doesn’t seemingly have anything to do with that object or place, but which, of course, really does."

Just before the sun dips its toes in the bay
we make the pilgrimage to Daniel's-by-the-Sea
where tall blue bottles of tequila spill their contents
into shot glasses. Don't bother asking for mix,
or anything else, unless you bring it, which we don't.
Instead, we bring stories wrapped in guises
of fact, fiction, or something in-between
while pelicans dive and fly,
skimming so close to breaking surf
you'd swear they'll fall in, but no;
only when they choose to.
Dogs rush other dogs rush other dogs,
large, small, doesn't matter—they just want to play.
A fisherman casts his net.
Eventually the sun sets. Glasses empty.
The world goes away.
In Lahore, a suicide bomber takes out a park. 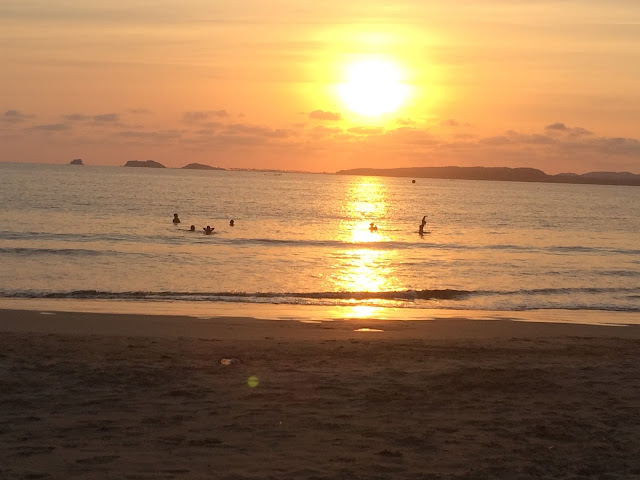 Perfection. Exactly the spirit of the Wright poem. Seriously. This is what I had hoped to accomplish. So good.

Congratulations, Linda! Sounds familiar!!!I can see you are definitely off your writing hiatus...

the fine details and the denouement. well done ~

Not only is that an excellent poem, but it sums up life for so many of us, we 're doing our ordinary things while on the other side of the world (or sometimes closer to home) major incidents are occuring

Great take on the prompt. Vividly written...I felt as if I was there :)

A very vivid and descriptive poem. I'm right there. Thanks for the journey.

Wow. That's like a punch in the face. Well done.

p.s. I see you are the featured blog at NaPoWriMo this morning! Brava!

Thank you, everyone! (James,sorry, I can't; I didn't subscribe you. Maybe you ticked the "email follow-up comments" box? At any rate, I suspect this thread is pretty much done.)

This is remarkably well done. The ending was a gut punch.

Beautifully done. I got chills!