LINKS IN THE POETRY CHAIN

My mother, who's in her nineties now, said the other day that she didn't think she was on the Internet and that she "certainly didn't want to be". I just checked, and so far, so good. My dad, on the other hand, can be found with a quick search of his name and Nelson, BC, as he was principal of the high school there from 1946 until 1972 when, at his retirement party, I came out of a cake. Sadly, as those were the days before digital cameras caught your every waking moment, there is no photo (that I know of) commemorating this event, but here we are shortly after I'd emerged. 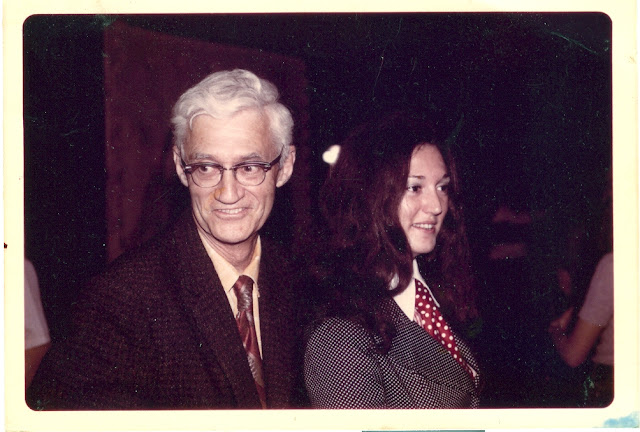 There's a lovely mention of him on the LV Rogers Secondary School's website, under history:

"An annex known as Lee Hall opened the same year to house the music program. The Hall was named after principal Gerald Lee who had been instrumental in a revival of the fine arts in the school throughout his tenure." Needless to say, the emphasis is mine.

I should mention that Lee Hall has since been torn down. In the 1990s fine arts became less, um, favoured in this School District. Province. Country. Hemisphere. Etc. But that's not what I want to blog about today.

So the other night I decided to see if I'd wound up anywhere new online. And I found two things I thought I'd share with you.

First, here's a link to a blog post by Mark F. Herron where he has a poem, Outer Banks, that he wrote in response to one of mine that he happened to read here on my blog! The poem in question, Salty Meringue Madness and the Traveling Fair, is the last one on my rather long post that day. I'm nothing short of tickled to think my words inspired someone to write something! Thanks, Mark.

Having found that link, I dug a little further in the Google mines and was rewarded with the discovery of a Pinterest link by one Alley K. to another one of my poems. I don't do much with Pinterest, but I quickly figured out how to repin that one! The poem in question, Minimum Wage, was published in the Antigonish Review a couple of years ago. I really like the company Alley K. has me in; some of her favourites include poems by Anne Sexton, Jane Hirshfield, Frank O'Hara, Pablo Neruda, Leonard Cohen, and Yeats. I am not for a second saying I'm up to any of their standards, but it's really nice to know that my words spoke to someone, too.

Here's the poem in its entirety:

I’m not your servant,
although you wouldn’t know it
the way you look me in the eye,
toss your empty coffee cup
at the garbage and miss.
You leave a trail like you’re afraid
you won’t be able to find your way back
if not for the cigarette butts, cash register receipts,
candy bar wrappers and used Kleenex
falling behind you like rice at a wedding.
But wait — there’s rice, too,
from the Styrofoam plate your kids knocked off the table,
even though you told them to sit still, goddamn it,
now there’s rice everywhere,
and the man with the mop will have to clean it up.
You nudge the Styrofoam plate a little further
under the table with your cross-trainered foot,
herd your kids into the washroom
for one last pee before the train goes.
One of them puts too much paper down the toilet
but you let him flush anyway.
After you’re gone,
after you’re all gone,
I’ll still be the man with the mop, wiping away
your every spill and smudge and spit and spoor,
getting rid of it all,
keeping only words you’ll never see
for poems you’ll never hear.


Apparently, somebody did hear this one! So thank you Alley K., and I love the image you used to go with the poem. 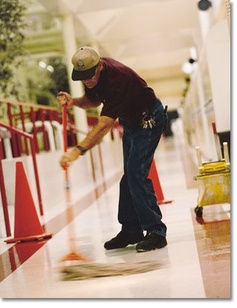 Now I'm off to the basement mines. A yard sale is in our future and it's time to dust off some boxes that have been thus labeled and gathering dust for the last three or four years and see what's inside. Who knows? Maybe I'll find a poem.

Posted by Linda Crosfield at 13:48

Love the picture of lovely young Linda - oh yes, and the poems as well. :)