Michael Dennis has been reviewing, or as he would say, "appreciating" poetry books on his Today's Book of Poetry blog for six years which makes me a little trepidatious when it comes to writing about poetry; he's so very good at it. Poet and Proper Tales Press publisher, Stuart Ross, interviewed Michael about his blog when it was just getting started. Since then Michael has posted his thoughts on over seven hundred books and chapbooks, including one of mine.

And now, hot off the press for 2019 are two new chapbooks by Michael himself: Divining (Proper Tales Press); and Sad Balloon (Monk Press). They're both quite wonderful and they're as different as can be. 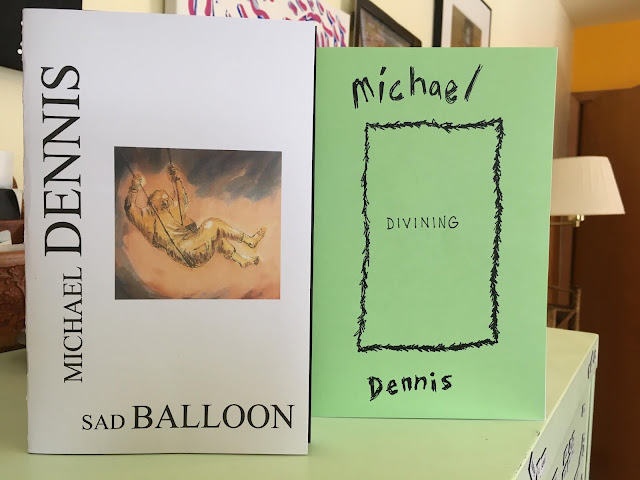 Divining is a collection of centos based on lines taken from Margaret Laurence's 1974 novel, The Diviners, and as is often the case with this form, some of the poems work better than others. At least, that's what I thought on first reading; when I went back to have another look in order to write about them I found myself "getting" more of them. Here's one that worked for me from the get-go:


Let me look at you


The ends of the lines are left without any punctuation which works well. The lines feel as if they landed on the page a little like strewn petals at a procession. I like how reading them takes me back to reading The Diviners. Lines like However dour and bad tempered (The brood mares), I don't give a fuck what any of them think  (Having never begun), and Don't let the buggers on either side get you (Walking up the hill) remind me of meeting crusty Christie Logan for the first time while Not writing, looking at the river (No conviction) makes me think of Morag Gunn. Altogether a fun book to read.

The work in Sad Balloon are for the most part, somewhat sombre in tone and the poems are always, always deeply thoughtful. Yet deft touches of Michael Dennis humour shine through as in these lines from the poem

talking with Stuart Ross on the phone


Who among us hasn't wondered about some of the questions raised in this one, for example:

I've been watching all these happy videos
of men and women, soldiers
coming home from service overseas
and surprising their families


In Roxanne and Tiffany the poem starts with a simple observation of a street person and then moves into an exchange between the narrator and his companion. The way it ends has me wondering if we've known some of the same Gails!


A number of the fourteen poems in Sad Balloon make reference to friends who have died which, of course, gives rise to ruminations about the eventual demise of the narrator himself. My husband and I are in the process of getting down on paper (so bloody difficult for this writer; why is that?) our advance directives in the event of one or both of us being incapacitated and I found myself nodding appreciatively while reading several of the poems.

All of them, actually.

Posted by Linda Crosfield at 17:25